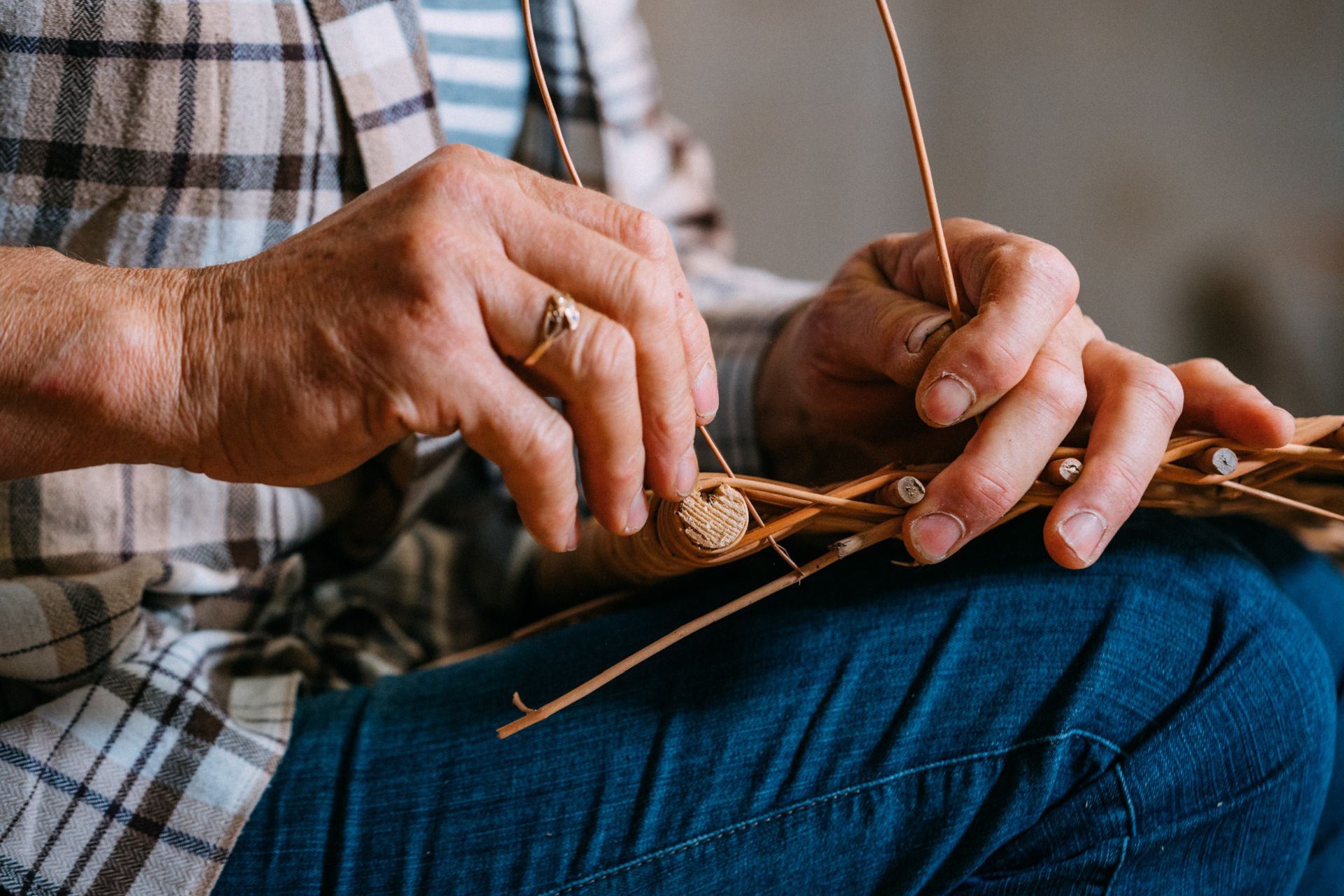 Weaving has accompanied man from the earliest times. As the population developed, new needs for utility, decorative, protective and construction items, including wicker and wood, were born.

In Rudnik nad Sanem, wicker farming began to develop at the end of the 19th century, and it was initiated by the owner of the Rudnik estate, count Ferdynand Hompesch (1843-1897), a member of parliament in Vienna, and through his wife Zofie née Wallenstein, related to the emperor Franz Józef. Ferdinand, following the example of his father Wilhelm, who in 1853 bought the Rudnica estate, took care of the town’s development and was interested in the life of its inhabitants. He even learned Polish. It was he who noticed that a lot of wicker grows by the San and decided to use this natural wealth. It was on his initiative and thanks to his efforts that several residents of Rudnik and Kopek were sent to a basketball school in Vienna, and then in 1878 a basketball school was established in the city, where homeworkers were educated under the watchful eye of handymen and basketball instructors. In this way, the entire production system was created based on outlay work, obtaining raw materials, wicker cultivation and the sale of finished products were introduced, which contributed to the increase in the number of inhabitants and improvement of their wealth.

In 1882, Count Hompesch founded a company called “Basketry School Karol Joseph Krauz in Vienna”. In 1919 it was turned into a large basketry workshop, where the workers associated in it made products and gallantry. Over the years, it became one of the largest basketry companies in Europe. Baskets and furniture were made not only from wicker, but also from imported materials such as bamboo, tropical reeds, raffia and jute.

After the death of Ferdinand Hompesch, grateful citizens of Rudnik erected a monument to him on the market square.  Every anniversary of the Count’s death, a delegation from the Town Hall and the Wickerwork Centre place a bunch of flowers at the memorial.

Blooming of the Rudnik basketry

Since 1919, in the town operated 12 companies engaged in exporting products and 20 companies trading on the domestic market. 3, 000 workshops employing about  15, 000  people worked for them. In 1928, some of them united in the Cooperative “Willow” belonging to the Association of Wicker Manufacturers in Lviv. The organisation survived until 1948, when, together with others, it formed the “Jedność” Cooperative.

For the needs of the developing crafts in 1932 Lviv School of Basketmaking was transferred to Rudnik nad Sanem, which three years later was transformed into the School of Wood Industry, the State School of Carpentry. In addition, in 1936 a Cooperative of Basketmakers was founded, which was liquidated during the war.

Rudnik basketry during the German occupation was included in the so-called war industry and used for the mass production of containers for war purposes.

In 1944, the warehouses of the former basketry built on the plot by the pond, became the property of the Treasury and were subordinated to the Ministry of Agriculture and Agricultural Reform. Then, thanks to the efforts of the city authorities and the management of the secondary school, they were, renovated and put to use by the secondary school in Rudnik nad Sanem. Over the following years, other warehouses were renovated by the community to be used as the main building, classrooms and dormitory.

After World War II, several cooperative organizations were established in Rudnik nad Sanem, and in 1948 the “Jedność” Wicker and Basketry Cooperative and the Wicker Plant. At that time, about 3,500 homeworkers and over 800 permanent workers were involved in weaving in wicker. After 1989, large plants ceased to exist. In their place, smaller companies dealing with the purchase of products and sales were created. The production is still done by homeworkers

11 July 2001 at the request of the Founding Committee Association called Wickerwork Corporation “Rudnik” based in Rudnik nad Sanem was registered. It is a non-governmental organization, which aims to support the development of entrepreneurship and business initiatives, cultivate cultural traditions, promoting the production and sale of wicker and products.

A breakthrough year was the opening of a new seat of the Centre for Wickerwork in Rudnik nad Sanem in 2006. The facility deals with the promotion of wickerwork by organizing exhibitions, events and workshops. In 2018, the tradition of wickerwork was inscribed on the National List of Intangible Cultural Heritage under the name “Weaving in Poland”.

Currently, manufacturers from Rudnik nad Sanem and the surrounding area produce the most wicker products in all of Europe. More than 130 years of tradition has made the local masters have no equal. Confirmation of this proficiency was winning the prestigious tender for the construction of wicker facade of the Polish Pavilion on EXPO 2015. And every day the quality of Rudnik’s products are appreciated by importers from Europe, Australia and America.

It is estimated that nowadays wickerwork in the commune provides jobs for about 900 families. There are over 35 wholesalers and about 50 smaller companies trading in these articles.